10 Reasons Why Your Approach to Cybersecurity Needs to Change

“The trouble with referees is that they know the rules, but they do not know the game.”

This insightful comment by Bill Shankly with reference to football can be rightly used to describe the present scenario in the cybersecurity ecosystem. A new white paper by PwC prompts a discussion about how our mindset and approach to cybersecurity now needs to change. Knowing the rules is just not enough anymore.

“The rules are important, but the increasing innovation and motivation of attackers makes it imperative to adapt our approach to security – and play a different game.”

It proposes 10 areas where important challenges must be confronted; this evolution will also provide some structure for innovative and disruptive technologies that are beginning to come to market but don’t fit the mould of traditional security controls.

Why the approach to cybersecurity needs to change? Why now?

The year of 2017 was a security nightmare. A series of attacks, many linked to nation states, raised awareness of not just the scale of the threat but also the vulnerability of many organisations to potentially devastating cyber intrusions. More data records were leaked or stolen by hackers during the first half of 2017 (1.9 billion) than all of 2016 (1.37 billion).

By the end of the year, cyber threats were the leading concern for UK and US CEOs according to PwC’s global CEO survey.

The ‘NotPetya’ attack launched on 27 June 2017 against companies with operations in the Ukraine was another serious demonstration that showed how a destructive attack could wipe out global operations within just tens of minutes and require a complete rebuild of global IT systems for companies to recover – disabling operations for many weeks.

NotPetya entered organisations through legitimately installed software, and spread across fully-patched systems, targeting the architecture of businesses and their IT as much as any weak controls.

Similarly there are several other examples of recent attacks that challenge conventional approach to cybersecurity about what is required to defend an organisation.

Rising to that challenge quickly will be a critical success factor for organisations in the coming years. 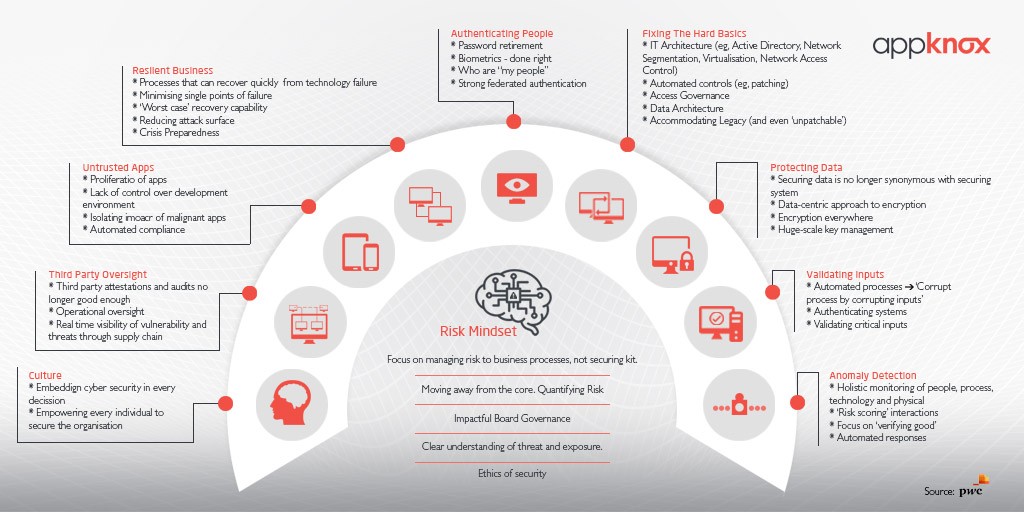 Ten important cybersecurity challenges that needs to be faced

Organisations need to take a strategic decision to move beyond good practice security controls. In addition to this, they must now identify how they need to change their operations. The research paper believes that the cybersecurity challenges to be faced can be roughly divided into 10 groups. There is no one-size-fits- all solution and different organisations will need to emphasise different areas. To confront the following challenges, organisations will have to change the way they think, work and behave.

Importantly these challenges will not be static, new problems will continue to appear as attackers advance their techniques.

The fact that so many security breaches are made possible by one of a small number of basic security failures seem to imply security should be relatively straightforward to improve. However, the challenge for many organisations, especially larger groups or those with legacy IT estates, is that fixing the basics is hard, and often it cannot be addressed effectively by traditional means.

Examples of these basic issues include:

To address these questions effectively requires new ways of thinking and new architectures.

In today's world, an organisation's data flows across many systems - the vast majority of which are outside the control of the organisation. Cloud service providers, suppliers, partners, staff and even customers operate systems on which sensitive data is stored and processed.

The challenge now is how to secure the data when you have little or no control of the systems on which the data is stored or processed. The whitepaper suggests a different approach to encryption and the management of encryption keys. Data must be encrypted so that wherever the data goes, the originator of the data retains control of the keys and can determine, at a granular level, whether access to that data is granted or denied.

Increasingly, cyber attacks are based on a concept that requires defenders to think more broadly about what cybersecurity is in order to manage them. Innovative attackers targeting a particular process or system may not attack that system directly, but may instead seek to corrupt a process by corrupting its inputs.

One example of the above scenario is - stealing money from a bank's systems by corrupting the customer inputs to online banking through online banking Trojans.

Defending against the above types of attacks requires digital processes to be designed with input validation at their core - for example: verifying sources of data, verifying the integrity of data, comparing inputs from different sources, and using artificial intelligence to monitor for deviations in data patterns.

However the proliferation of attacks and the ability of attackers to craft custom malicious code for a single target mean that this approach is not sustainable.

The whitepaper suggests making use of artificial intelligence and machine learning tools to effectively identify and block attacks that have not been seen previously. This will thus enable new attack types to be blocked in real-time, without the need for human intervention, which is critical for combatting attacks such as NotPetya, which achieved it's destructive intent within minutes.

Cybersecurity impacts every area of a business and its operations, and requires organisations to consider changing how they operate as much as applying security controls - they must embed cybersecurity into their DNA.

The PwC research highlights two things for this:

- Firstly, every individual in the organisation needs to believe that they have a responsibility to protect the organisation through the way they do their job. They need to be supported and rewarded for doing so and empowered to challenge processes, decisions or situations that may put the organisation at risk.

- Secondly, every decision made within an organisation should consider cybersecurity implications. This starts from right at the top, with executive management and the board realising that almost every decision they make can impact cyber risk - examples include entering new markets, releasing new products, M&A activity, interacting with customers in a new way and even taking on new customers.

The whitepaper highlights that the cyber risks in supply chains that are increasingly apparent in recent years, and along with rises the need to take action in order to manage that risk.

The research provides three elements to the action that is required to manage risk through the supply chain:

- The first step is often overlooked and that is simplify the problem by simplifying the supply chain. Reducing the number of suppliers that have access to systems will enhance security.

- The second step is to streamline and optimise the audit and review activity undertaken over suppliers.

- The third step for organisations is to develop a real-time operational view of threats and vulnerabilities through their supply chain. 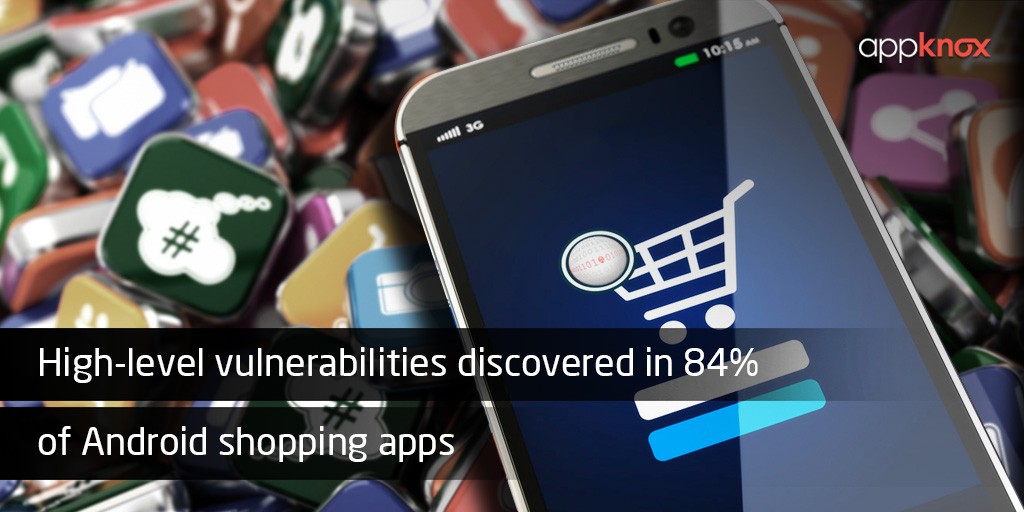 To generate further awareness that many popular mobile apps built today are plagued by security issues and vulnerabilities, we conducted our own in-house research showcasing the security trends in the top 50 mobile apps in the shopping category in the US. Our findings show that over 84% of the apps analyzed have more than three high-level vulnerabilities in them.

It is now an accepted truth that cyber breaches will happen. Many businesses are therefore focusing on how they could be resilient to different types of successful cyber-attack and minimise impact.

The need of the hour is for different thinking around what is required to construct a resilient business. Some examples of this include:

The nine previous challenges collectively speak to an underlying issue that is confronted by this whitepaper - how do we change the mindset around what cyber risk is and what is needed to manage it?

The following can be helpful in answering the above questions:

- Managing the risk from cyber attacks requires a deep understanding of what digital processes and data flows the business is built on, their reliance on others, their inputs, and their dependencies.
- Clear understanding of potential threats and exposures
- Impactful board governance will ensure cybersecurity is not just a programme but a driver of business and technology re-architecture, supported by metrics that quantify risks.
- Answering ethical questions in line with clear organisation values. Example - questions such as what should be monitored and what should deliberately be placed outside the reach of any monitoring capability etc.

Last but not the least, facing the challenges and rethinking your approach to cybersecurity as outlined in this whitepaper will require change and commitment. That can only be possible whe the risk mindset of an organisation reflects the reality that cybersecurity is as much about re-architecting business and technology as it is about applying security controls.

Cybersecurity for Schools: Why Attackers are Moving their Attention Towards the Education Industry

Cybersecurity for schools is slowly becoming a hot topic for discussion amongst the security community. While it's a ...

Since its inception in 2004, the month of September is recognized as National Preparedness Month in the United States ...