OWASP is known to update this list every three to four years. The OWASP Top 10 list is considered a benchmark in the application security community. The list not only contains the latest vulnerabilities, threats and attacks but also tactics on how to detect and resolve them. The OWASP Top 10 list is created by analyzing the occurrence rates and severity levels of each threat.

We've extensively covered about each of the OWASP Top 10 threats in the 2013 edition, and we'll continue to do that for the new OWASP Top 10 2017 edition as well. Here's what is new this year:

The 2017 list contains the following as the Top 10 threats: 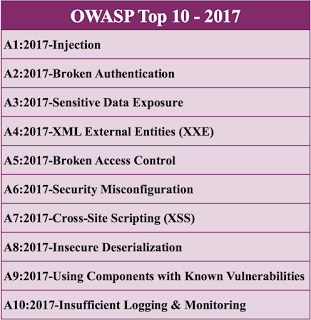 There are some new issues here which are primarily modern era issues. It's important for developers, businesses and security companies like us to make headway for them.

Some of these issues need more explanation:

The new and revised list is based on over 40 data submissions from firms that specialize in application security and an industry survey that was completed by over 500 individuals. Here's how the change appears compared to the Top 10 list from 2013:

Let's dive a little deeper into what are the new threats that made it to the OWASP Top 10 2017 list:

XML External Entities - According to OWASP, an XML External Entity attack is a type of attack against an application that parses XML input. This attack occurs when a weakly configured XML parser processes an XML input that contains a reference to an external entity. This is a critical issue and can lead to loss of confidential information, denial of service, server-side request forgery, and other system-level impacts.

Insecure Deserialization - According to OWASP, “Serialization is the process of turning some object into a data format that can be restored later. People often serialize objects in order to save them to storage or to send as part of communications. Deserialization is the reverse of that process – taking data structured from some format, and rebuilding it into an object.” Based on the definition above, an insecure deserialization can lead to remote code execution. Even if remote code execution doesn't happen, this can lead to other flaws like replay attacks, injections attacks, etc.

Insufficient Logging and Monitoring - According to OWASP, insufficient logging and monitoring can allow attackers to deepen their attack on systems, be more persistent, pivot to more system, extract and destroy data.

“A great deal of feedback was received during the creation of the OWASP Top 10 – 2017, more than for any other equivalent OWASP effort. This shows how much passion the community has for the OWASP Top 10, and thus how critical it is for OWASP to get the Top 10 right for the majority of use cases,” the OWASP team wrote.

Session handling is a very well known security concern for Web applications, but it can be an even bigger problem in ...