Since its arrival on the cyber security landscape, SQL injection has continued to be one of the topmost cyber security concerns. As a hacking technique, it is known for its devastating capabilities and the havoc it can cause for institutions of any size and type. Moreover, the frequency of such attacks grew exponentially by around 44% in two years (from 2017 to 2019).

Not to mention, this technique has been used in activities ranging from personal data theft during the US presidential elections to high-profile security breaches at Sony, Microsoft, Yahoo, and even CIA.

Here, we have compiled a list of tools that aid in the detection of SQL injection attacks and also a few essential steps which must be taken to prevent such attacks.

But before moving forward, let's see how injection attacks can impact your business and whether or not you are vulnerable to them.

Is Your Business Vulnerable to SQL Injection Attacks?

SQL, or Structured Query Language as it is commonly called, is the preliminary language used for manipulating the most widely used relational databases like Oracle, Microsoft SQL Server, and MySQL. These databases can be referred to as the basic building blocks of modern-day web apps and content management systems.

The threat actors who wish to compromise your security systems through SQL injection attacks are after the sensitive data stored in your databases. The content and behavior of applications & websites are controlled as well as curated through these database servers.

So, if your servers hold any form of sensitive data, which is usually the case, you are vulnerable to SQL injection attacks.

If hackers, by any means, gain access to your critical databases, the results could be catastrophic. In a severe event like an SQL injection login bypass attack, the threat actors could gain unprecedented control over the entire system and access and modify critical business or customer data.

The result of an SQL injection attack could range from disruption of website or application content to breach of sensitive user information. If you understand the role databases play in the back-end, you surely would realize how devastating it could be if a hacker executes a simple SQL injection command like DROP TABLE!

The best way to test your defense is to check it with your weapons. However, given the complexity of SQL, the task won't be as easy as it sounds. It is generally a complicated task to create a code snippet and inject it into a query to compromise a relational database.

On the other hand, this seemingly difficult task could be made easy by deploying some specialized tools. These automated SQL injection attack tools could replicate real attack scenarios and help you test your system in immense detail.

Let's take a look at some of the most commonly used tools to detect and prevent SQL injection:

One of the most frequently used tools for identifying and exploiting SQL injection flaws, Sqlmap, is an open-source pen-testing tool that provides extensive security to database servers. Apart from several other functionalities, the most exciting feature of Sqlmap is its powerful detection engine, which quickly detects injection flaws in the system. Experts also recognize a GUI version of SQLmap, known as TyrantSQL, as a promising automated tool.

Developed by Iranian cyber experts, Havi instantly determines the database details of the target system by quickly getting through its security layers. Using the acquired database knowledge, Havij later builds complex queries to dive deeper into the detailed database characteristics. Without much knowledge of SQL, security professionals can extract tables, fields, and even bigger chunks of data from the target database using Havij.

The error-fixing feature in the tool helps you correct some of the identified vulnerabilities as well. Available in both open-source and licensed versions, Havij is famously known for its functionality across the data security market.

Designed especially for blind SQLi attacks, BSQL hacker is a well-to-do injection tool. With GUI and console support, this tool supports most of the injection points, including HTTP, cookies, and query strings. This tool supports Oracle, MySQL, and MSSQL as well.

This tool works for web applications that are based on SQL Server. After discovering injection flaws, this tool efficiently automated the process of exploitation and extracts all the necessary information from the database. By allowing remote access to the database servers, SQLninja allows the overall security assessment of the web application in question.

One crucial aspect worth noticing here is that these tools not only enable security experts to assess their systems but also supplement threat actors with an arsenal of SQL injection techniques. And for these reasons, you should test your applications with these mentioned tools beforehand and fix the suggested vulnerabilities before someone else could exploit them.

How to Prevent SQL Injection attacks? 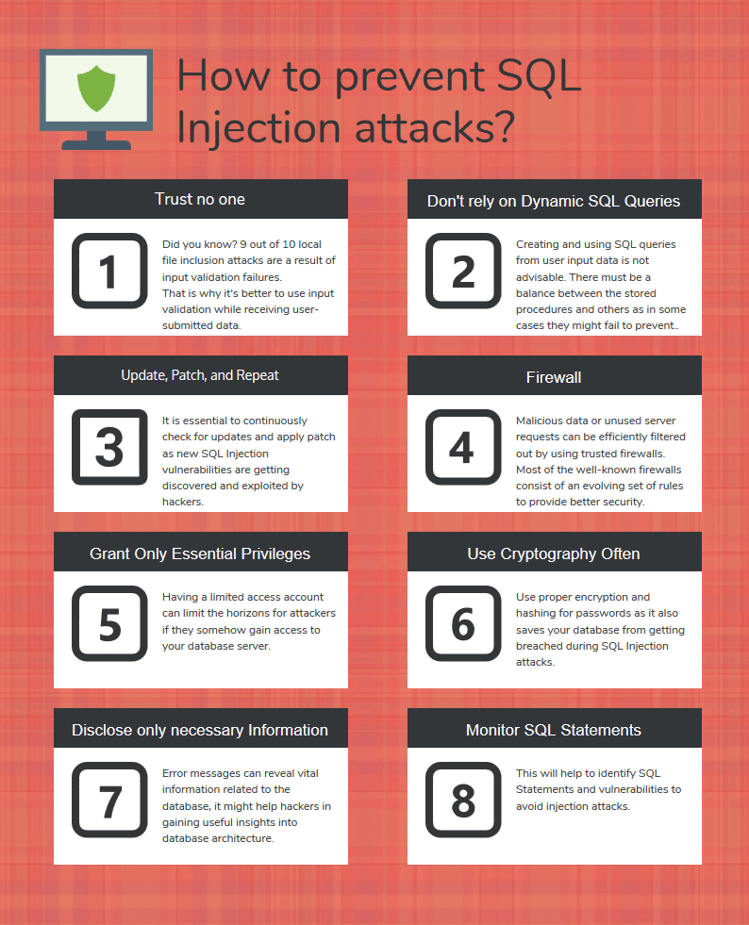 Here are some guidelines on how you can drastically reduce the risk and impact of SQL injection attacks.

1. Filter Data Wherever You Can

It is also advised to filter data by context. You should only allow those characters and numbers which are valid in the case of email addresses and only those digits that are allowed in phone numbers and so on.

Creating and using SQL queries from user input data is not advisable. It is better to utilize stored, or parameterized queries and prepared statements as even the best data cleaning procedures could have flaws in them. However, there must be a balance between the stored procedures and others, as in many cases, even they might fail to prevent SQL injection attacks.

New SQL injection vulnerabilities keep getting discovered and exploited by hackers regularly. That is why it becomes essential to continuously check for updates and apply patches as soon as possible. You can also rely on a patch management system to take care of your worries.

4. Use a Reliable Web Application Firewall

Malicious data or unusual server requests can be efficiently filtered out by using trusted firewalls. Most of the well-known firewalls consist of an evolving set of rules to provide the best possible security protection. They can provide some underlying security even against newly discovered threats before a patch is available for them.

One such commonly used firewall is ModSecurity, which is available for a variety of web servers, including Apache and Nginx. Its ever-evolving set of data security rules is best known for filtering dangerous server requests. Its ability to nullify SQL injection attacks has made it a favorite amongst other similar choices.

It's not necessary to always connect to your database using accounts with admin-level privileges. It should be done only under compelling circumstances. Having a limited access account can limit the horizons for attackers if they somehow gain access to your database servers. Suppose an attacker gains access to the code behind your login page. If he gets only limited access to the database, then the breach wouldn't be as damaging as it could potentially be.

In a world this shrewd, it's better to keep your secrets as classified as possible. Using proper encryption and hashing for passwords is always considered a safe practice, and it also saves your databases from getting breached during SQL injection attacks.

Even error messages can reveal a great deal of vital information related to the database. This might help hackers in gaining useful insights into database architecture. That is why care must be taken before disclosing any added information anywhere over your platform. Using verbose error messages which reveal nothing about the concerned database might help the cause.

In order to avoid injection attacks, it is necessary to assess SQL statements from applications connected to the same databases regularly. This helps in filtering unwanted statements and other critical vulnerabilities. Techniques like behavioral analysis and monitoring tools that rely on machine learning can prove to be useful.

Imagine a developer needs to show the account numbers and balances for the current user’s id as provided in a URL. They might write (in Java):

This means that the account balance query would end up being:

This is passed to the database, and the accounts and balances for user 984 are returned, and rows are added to the page to show them.

The attacker could change the parameter “user_id” to be interpreted as:

And this results in the account balance query being:

You could easily repair this vulnerability by using a prepared statement to create a parameterized query as below:

If an attacker attempts to supply a value that’s not a simple integer, then statement.setInt() will throw an SQLException error rather than permitting the query to complete.

Imagine a developer implements a login form and writes (in Java): 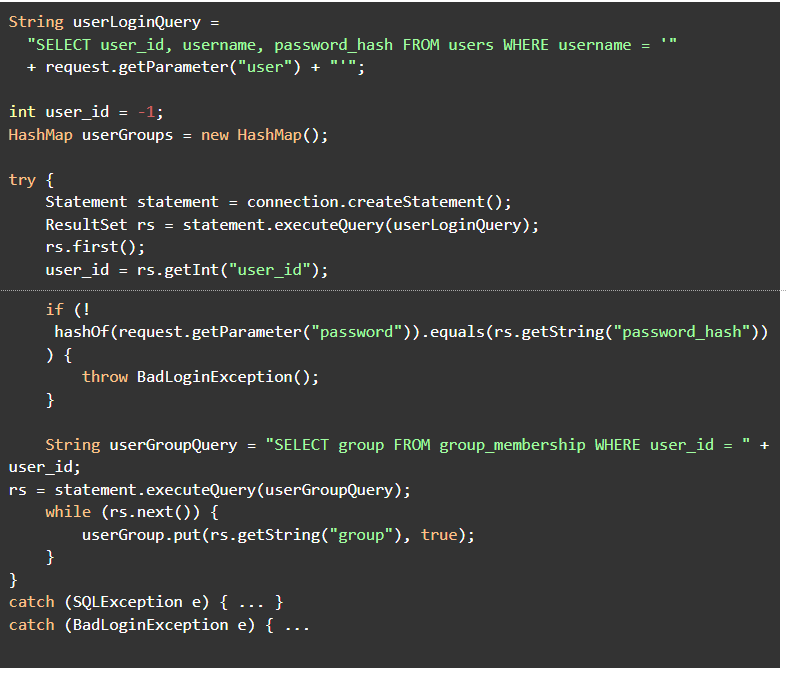 Normally, a user would provide a username (say “Alice”) and password, and the first query executed would be:

The database returns Alice's user ID and password hash, Alice's password is hashed compared, and then the database gets the list of groups to which Alice belongs.

However, if an attacker has Alice's password (maybe the attacker is Alice!), they could make Alice an admin. They’d log in using the following as a username (newlines added for ease of reading):

This means the query passed to the database would be:

Note that the single-quote character in the input results in the remainder of the input is interpreted as part of the SQL statement, rather than part of the value. Alice will now belong to the group “Administrator.” Note that the attacker can change Alice's group without completing the login process in this scenario; that means an attacker that hasn’t guessed Alice's password could perhaps delete accounts, reset passwords, and the like.

The developer could easily repair this vulnerability by using a prepared statement to create a parameterized query as below:

This query will return no results when the 'user' parameter contains a SQL Injection attack since the parameter's value is sanitized by the PreparedStatement.

Despite the grueling outcomes, organizations still don't realize the gravity of SQL injection attacks. It's high time that business owners understand this risk and move forward with prevention techniques. The message is simple and clear - if your business relies on a SQL database system, you have to take every possible step to stay safe from the threat of SQL injection. Abiding by a few simple steps will not only safeguard your customers but also save your business.

Appknox SAST can accurately identify SQL injection vulnerabilities and other flaws in your application and its third-party library components, and tell your developers exactly where and how to repair them. All without ever looking at the source code further the issues can be pushed to jira.

Appknox plugins with Popular CI/CD tools to test for security issues on each build like Azure, Github, Gitlab, Jenkins, and bitbucket. 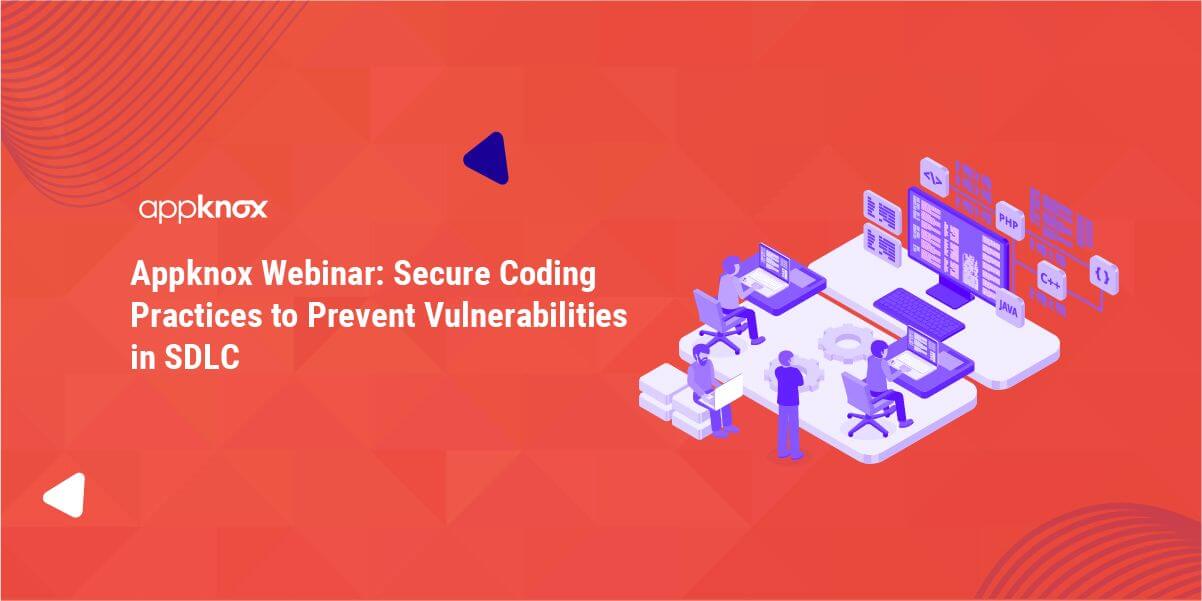 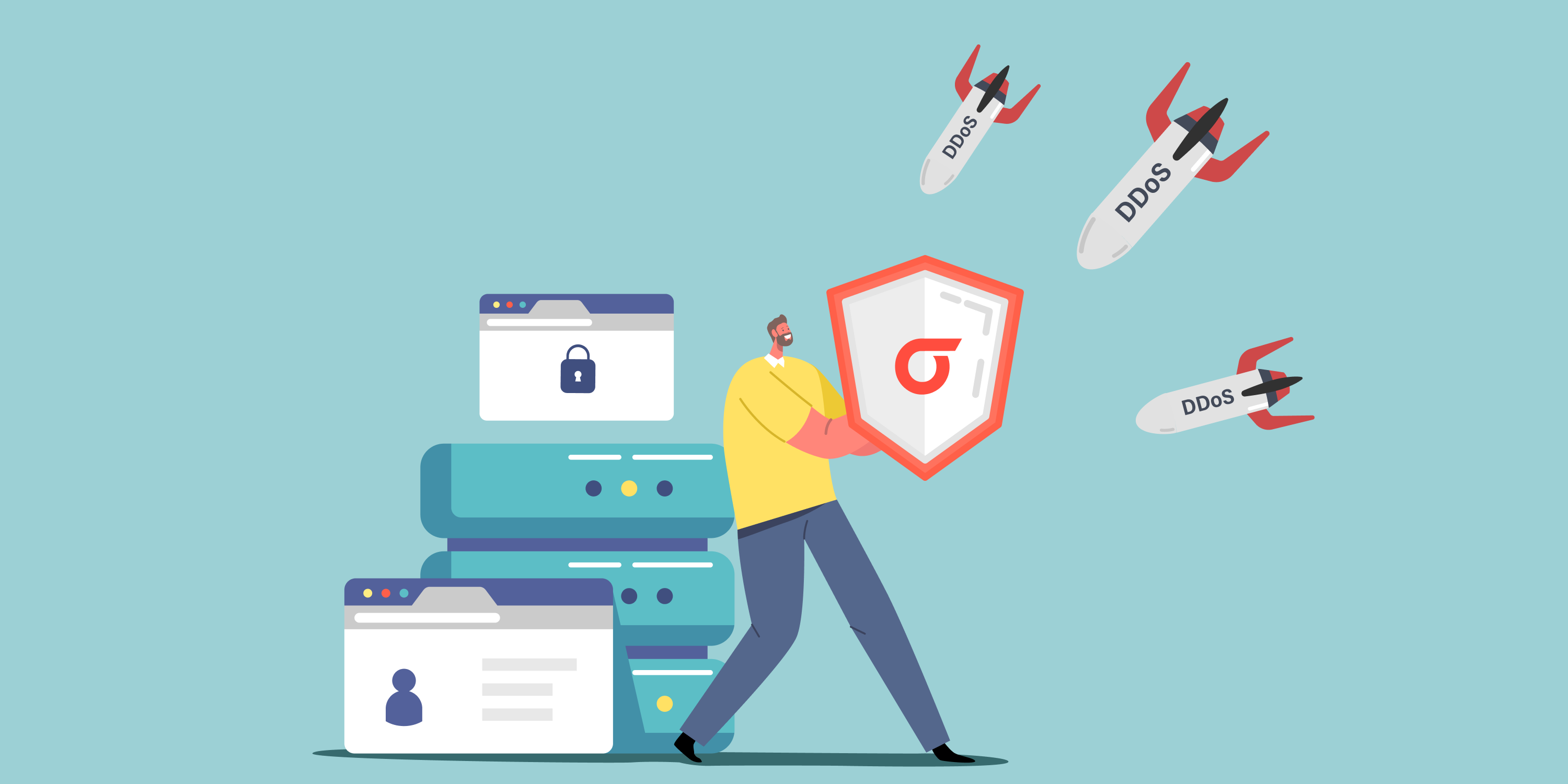 DDoS attacks are rising, and hosts find it harder to prevent them. Distributed Denial of Service attack or DDoS attack ...