10 Reasons Why Apple Rejects Apps From The App Store 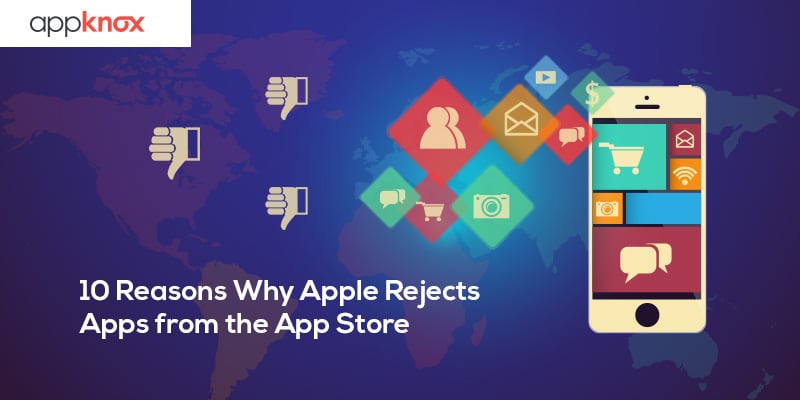 Every application store has certain criteria on the basis of which they approve or reject apps that want to be listed on their app store. Apple is known to employ slightly more stringent norms as compared to its other counterparts as far as approving apps is concerned.

Before you develop your app, it’s important to become familiar with the technical, content, and design criteria that is required by Apple as part of the review process of all apps.

Here are the top 10 most common issues that cause apps to get rejected to help you better prepare your apps before submitting them for review.

According to Apple, 16% of all App Store rejections are for “more information needed.” Apple requires developers to be able to fully explain their apps or fill in missing bits of information and context.

2. PRESENCE OF BUGS AND CRASHES

12% of the apps are rejected by Apple because they crash and have bugs. You should submit your app for review only when it is complete and ready to be published. Apple suggests that developers should make sure to thoroughly test the app on devices and fix all bugs before submitting.

Guideline 10.6 of Apple Developer Guidelines outlines that Apple and its customers place a high value on simple, refined, creative, well thought through interfaces. They take more work but are worth it. Apple sets a high bar. If your user interface is complex or less than very good, it may be rejected.

5. INAPPROPRIATE NAMING OF THE APP IN THE APPLE APP STORE

The app name listed in the App Store should be same as the app name when it gets installed in the device. It avoids any confusion to the users in identifying the app. Guideline 3.4 of the Apple Developer Guidelines mentions that “app names in iTunes Connect and as displayed on a device should be similar, so as not to cause confusion”.

4% of the apps get rejected due to inappropriate naming of the app.

Apple requires apps to be unique with their names, icons or interface and discourages imitation of any other apps. Guideline 22.2 of the Apple Developer Guidelines states that “apps that contain false, fraudulent or misleading representations or use names or icons similar to other Apps will be rejected.”

5% of the apps that seek permission are dismissed because they appear confusingly similar to an existing Apple product.

Any reference to a rival platform will be rejected by Apple. For example, if you use terms like Samsung, Lenovo etc. it would reject your app. Apple is very particular about this
point to the extent that even if you simply upload a screenshot showing an Android device, it would banish your app.

Here’s the exact Guideline 3.1, “Apps or metadata that mentions the name of any other mobile platform will be rejected.”

Apps cannot transmit data about a user without obtaining the user's prior permission and providing the user with access to information about how and where the data will be used. Apps that include account registration or access a user’s existing account must include a privacy policy or they will be rejected.

9. INAPPROPRIATE RATING OF THE APP

Apple requires you to rate your own app genuinely against some pre-defined parameters (based on the domain your app falls into). As per the Guideline 3.8 of the Apple Developer Guidelines, “the Developers are responsible for assigning appropriate ratings to their Apps. Inappropriate ratings may be changed/deleted by Apple.”

Guideline 8 of the Apple Developer Guidelines outlines the Content and Intellectual Property Rights accepted by Apple to get accepted in the App Store.

To read more on the guidelines & resolve these issues, click here

5 Reasons to Work At a Startup | Appknox

Have you ever considered working at a startup? My internship at Appknox taught me several things about startups. Here ...

10 Reasons Why Your Approach to Cybersecurity Needs to Change

The ecosystem of cybersecurity gets complicated day-by-day as hackers continue to push their boundaries of motivation ...