How Digital Banking is The New Talk Of Town!

In today's digital world where consumers have become more tech-savvy with more sophisticated expectations, it has resulted in a driving change in a way banking as a service is now used - Digital Banking. With new startups and technology firms setting foot in the financial sector, it's become critical for banks to change their strategies from a traditional mode to a more digital based, as gaining market share is becoming complex with the coming of new competitive entrants and ever changing client demands. 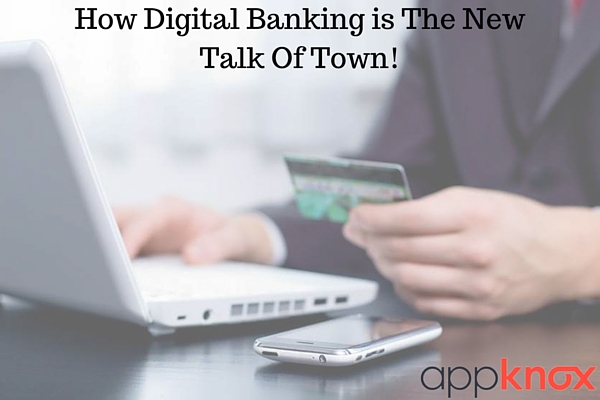 Traditionally, Indian companies have been slow to adopt the technology. However, in recent months, companies across sectors are expressing interest in going ‘digital’. This trend has been further encouraged by the Government’s ‘Digital India’ program. Finance minister Arun Jaitley said - “Technology is trying to bring about a great change in the banking industry and it is going to make saving easier and accounting of money easier.”

The aim of Digital India is to ensure that government services are made available to citizens electronically by reducing paperwork. The initiative also includes the plan to connect rural areas with high-speed internet networks. It has three core components:

In line with the Digital India initiative, the Prime Minister's 'Pradhan Mantri Jan Dhan Yojana' saw an opening of 15 million bank accounts on the inauguration day itself. By 05 August 2015, 17.45 crore accounts were opened, with around ₹22032.68 crore (US$3.3 billion) were deposited under the scheme. The main intention of this scheme was to provide universal access to banking facilities to every household, thus bringing new technologies and mobile banking access for the poor.

Digital banking will reduce transactions done at branch-level, thus easing the pressures of customer service as well as reducing the overall operating costs of banks. Increase usage of net banking and technology in mode of payments would reduce the frequency of unaccounted money that has been used as black money by traders and business man as well as politicians.

Digitalization further creates abundant opportunities for various sectors. The healthcare industry for instance has undergone a global transformation digitally. With the coming of Bring Your Own Device (BYOD), doctors can access patient records on their devices with ease.

Here are the some of the recent initiatives in digital banking:

While digital banking is becoming the new talk of town, so does the security concerns associated with it. It's imperative for banks to be proactive towards the need for mobile security. Mobile apps and digital wallets needs to be secure enough as it contains critical customer data and account details. Even a small security loophole can result in a huge financial loss for both the bank and its customers.

Mobile security is a top priority at Appknox. We are proactive always in securing the mobile apps and digital wallets of the leading banks and payment companies. We constantly update ourselves with new threats, so that we can provide top class security solutions to our customers.